People used to laugh at medieval medical practices, and they still do from time to time.  Especially we tend to laugh when we read of medieval doctors bleeding people, or talking about the 4 humours and vital spirits.  We also laugh at the p 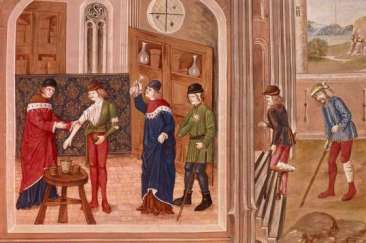 opular idea that witches caused illness, when in fact we know now that witches only cause stress – which CAN lead to illness.

But now some people are starting to take medieval medicine a lot more seriously.

It is because of super bugs, created by the widespread use of antibiotics.  Apparently, a company has been trying out medieval remedies to combat some of these super bugs, with great effectiveness.  Medieval remedies for eye infection, found in an old Anglo-Saxon potion book, kill 99% of the superbugs, it is being reported!

That’s great news!  The problem is of course that the surviving 1% of those super bugs must be really, really super….

Still, it’s good to know we have medieval medicine in our corner if antibiotics stop doing what they’re supposed to do.  And this is just another reason to take our medieval ancestors a little more seriously, and to realize that Monty Python and the Holy Grail is not a documentary.

View all posts by medievalradio